Air pollution.. India tops the world lists for the fourth year 46 countries in South Asia are among the 50 most polluted countries around the world

For the fourth year in a row, India tops the lists of countries with the highest air pollution, in the “IQ Air” index for 2021, issued by the Swedish Air Quality Control Authority, which monitors air quality globally, and which indicated that South Asia is the most dangerous region. In the world.

The World Health Organization classified the Indian city of New Delhi in 2014 as one of the most polluted cities in the world, due to dangerous levels of pollution with fine particulate matter, known as “PM2.5”, to embody the city since that time the true synonym of the term hazardous air.

The air quality monitoring report, “IQ Air”, said that New Delhi was once again among the most polluted cities in the world, and the most polluted capital for the fourth year in a row, according to what was quoted by the “Inside Climate News” platform.

Air pollution in India.. 9 cities top the list of the world’s top 10 in pollution
While New Delhi leads the cities with dangerous air pollution, the deadly air crisis is not limited to New Delhi or India in general, as the Air Quality Index indicated that 46 out of the 50 most polluted cities on the planet are located in South Asia.

The report, which focuses on air pollution and air quality, found that South Asia is the most polluted region in the world, with vehicle emissions, commerce, burning of post-harvest crop residues, and home cooking using solid fuels seriously deteriorating air quality.

According to the 2019 Air Quality Index report, New Delhi residents will lose about 9 years of their life expectancy, if air pollution levels remain the same.

At the same time, the World Health Organization links many short- and long-term health risk factors to exposure to PM2.5, tiny particles of pollution smaller than 2.5 microns, about 1 30th the diameter of a human hair, that irritate the eyes and nose. and lungs, exacerbating asthma and other respiratory diseases, and increasing the risk of death from lung cancer and heart disease.

These particles come from vehicle exhaust, burning fuels such as wood, heating oil or coal, and from burning natural sources such as grass, and forest fires.

A comparative risk assessment of the global burden of disease estimates that exposure to air pollution contributed to more than 1.6 million deaths in India, 128,000 in Pakistan, 123,000 in Bangladesh, and in 2020, more than 50 air pollution-related deaths occurred in New Delhi. . 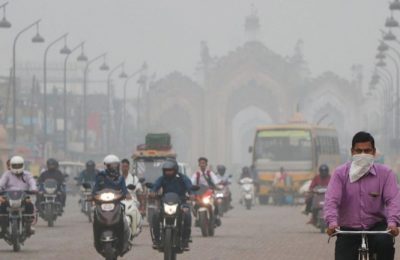 Dark clouds of exhaust billow up in New Delhi and other major cities in the region, as the streets are choked with new and old cars, taxis, trucks, buses and motorbikes.

The New Delhi government has reintroduced the Odd Evin rule, a road space rationing policy first introduced in Beijing in 2008 to limit the number of cars on the road on particularly foggy days. On the roads on odd and even days of the week, consecutively.

Pakistan’s Lahore city is the second most polluted city in the country, with over 11 million residents and more than 5 million registered vehicles, so it suffers from air pollution levels similar to that of Delhi, and lacks any kind of comprehensive policies to tackle transport pollution.

Every winter, with the windy season approaching, farmers across northern India and adjacent areas in Pakistan set fires to the stems, leaves and other harvest residues on thousands of acres of farmland.

As the rains recede, the winds become more intense and the weather becomes drier, and smoke chokes the various regions. Post-harvest burning in Punjab on both sides of the Indo-Pakistan border and in India’s Haryana state contributes significantly to deteriorating air quality in the Indo-Gangetic Plain.

The report notes that farmers’ preparations for planting next season have led to air pollution in both Pakistan and India from the Indo-Gangetic Plain to dangerous levels more than 10 times the thickness of normal levels of fine particulate matter previously identified by the World Health Organization.

In November 2020, more than 4,000 agricultural plots caught fire, stretching about 409 kilometers of land between Delhi and Lahore.