A new study warns of the risk of climate change worsening in coastal Britain, finding that rising seas will cause the loss of 200,000 homes in just 30 years.

The study was carried out by a group of researchers at the British Center for Climate Research “Tindal Center” at the University of “East Anglia”, and was published in the journal “Ocean and Coastal Management”, according to the British BBC website (BBC).

The author of the study, an expert in floods and coastal hazards, Paul Sayers, found that nearly a third of England’s coast would be in grave danger due to sea level rise, and stressed the need to take strict decisions to protect it, according to what was monitored by the specialized energy platform. 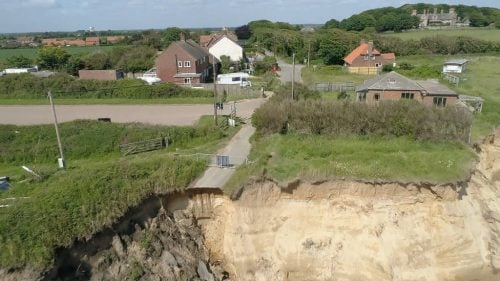 There is consensus among researchers that sea-level rise is inevitable, and governments cannot save all real estate.

The study is looking for the first time at places where protection might be expensive or technically impossible.

and warned that nearly a third of England’s coast was in danger; due to sea level rise.

According to the study, the owners of about 160,000 properties will be forced to change the locations of their properties. In addition, it was found that about 30-35 thousand properties are at risk, by 2050, and the value of these homes is tens of billions of dollars.

According to the study’s author, Paul Sayers, regions in southwest and northwest England and East Anglia have the highest number of properties at risk of flooding.

“It will be difficult to maintain the shoreline along the beaches,” he said. “There are places that can be protected, and other places that are impossible, so we need to have a frank discussion about how to do that, and support the communities that will be affected.”

“Rising sea levels will not only increase the risk of flooding on the coast and in estuaries, but also accelerate coastal erosion,” he added.

The researchers also indicated that the country could experience a sea level rise of about 35 centimeters within 30 years, and it is expected to rise to nearly a meter by the end of the century.

The new study also warns that it may be difficult to protect some communities, as the progress of the seas caused by climate change, and the erosion of the front coasts due to waves, increases the risk of floods.

In addition, she compared the increased risk of coastal flooding to current beach management policies, calling for a national debate on the risk of flooding to coastal communities.

Sea-level rise, along with wave erosion, increases coastal flood risks, and governments and local communities are making decisions about how to preserve the sea-facing shoreline, either by building seawalls, or reorganizing the shoreline and relocating real estate.

This comes a week after the chief executive of the Environment Agency in Britain, James Bevan, announced that some coastal towns and villages in Britain would be impossible to save and would have to be abandoned due to rising sea levels and coastal erosion.

“In the long term, climate change means that some societies – whether in Britain or around the world – will have to change their place,” Bevian said at a conference last week.

He explained that it is possible to rebuild after most river floods, but this is difficult when coastal erosion or lands that have disappeared due to sea level rise.

“In some places, the right choice – economically, strategically and humanitarianly – would be to keep communities out of danger rather than trying to protect them from the inevitable effects of sea-level rise.”

The EU initiative encourages farmers to make changes, such as using carbon-rich fertilizers, reducing tillage that spoils the soil, and planting trees and crops that can absorb carbon dioxide from the atmosphere.

The European Union is funding pilot carbon farming projects aimed at improving agricultural soil health to tackle climate change in Belgium, the Netherlands, Germany and Norway to sell carbon credits in exchange for carbon sequestration on their farmlands.

Recently, a new technology, called carbon farming, has emerged to provide one of the solutions to face the climate change crisis.

The new technology is one of the many technologies that appear from time to time, to confront the rising carbon emissions, which are now threatening the planet.

Carbon farming changes agricultural practices, or the use of land, to increase the amount of carbon stored in soil and vegetation to reduce agricultural emissions and mitigate the effects of climate change.

The new technologies rely on agricultural methods that can sequester atmospheric carbon in agricultural soil, plant and crop roots, tree timber and leaves.

At the beginning of 2022, the French Presidency of the European Union made new purification a priority of its agricultural policy, and there are many crops adopted by farmers in Europe, such as alfalfa, lemon and dandelion, that can sequester carbon dioxide all year round.