Gold prices stabilize near the highest level in two months

Gold prices stabilized today, Tuesday, near their highest level in two months, in conjunction with the decline of the dollar, and the decline in US bond yields.

On Monday, gold prices closed at their highest level in two months as inflation fears persisted after a number of central banks indicated that interest rates would remain low in the near term.

This comes as investors await key inflation data in the US to gauge the Fed’s next move on raising interest rates.

The benchmark 10-year yield in the US was little changed at 1.4862% after rising 4 basis points in the previous session; This weakened the attractiveness of gold by increasing the opportunity cost of the non-returnable metal.

A weak dollar reduces the cost of bullion for buyers who hold other currencies, while lower returns reduce the opportunity cost of non-interest bearing bullion.

“A rally to $1,825 could trigger a technical pattern that could take gold back to the $2000 region,” said Jeffrey Halley.

The focus is now on CPI inflation data due for release on Wednesday which could test the Fed’s stance on raising interest rates; The tightening in the labor market combined with global supply chain issues could lead to another higher reading. 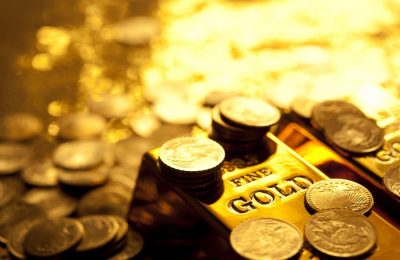 The rise in gold prices comes on the heels of several Federal Reserve officials who have expressed increasing concerns about continued price increases.

US Federal Reserve officials focus on the debate about how many jobs the economy can add, and how high inflation can be tolerated.

But Fed Vice President Richard Clarida and Chicago Fed President Charles Evans indicated that a rate hike was not on the table yet.

The Chicago Fed chief said that while he’s a little more concerned about inflation staying higher than it used to be; He still believes that the Fed will not need to raise interest rates until 2023.

Gold benefited from the near-zero interest rates that were introduced during the Corona epidemic; It lowers the opportunity cost of bullion.

“I don’t expect anything imminent from the Fed, but the above consensus CPI could make market expectations of a rate hike in 2022 more likely,” said Nicholas Frabel, global general manager at AC Bolton, adding that such a scenario would likely be negative for gold.

For its part, the Russian Finance Ministry said that Moscow produced 256.54 tons of gold between January and September, up from 253.77 tons produced in the same period in 2020.