A day in a Glance: Market, Forex and oil

European markets are attempting to recover after Thursday’s sell-off, which has seen the continent’s technology industry fall 3.8%, leading to declines across the panel:

European markets have similarly been absorbing the euro zone’s final November PMI (purchasing managers’ index) data. The composite PMI, which includes manufacturing and services, rose to 55.4 in November from 54.2 in October, although fell short of an early flash forecast of 55.8.

Concerns over the omicron variant possible impact waned significantly on Friday as experts in South Africa, in which the variant was identified, suggested that current vaccinations must still fight against serious conditions and fatalities from Covid-19. 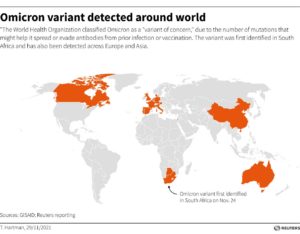 In early premarket activity in the United States, stock futures were quiet as investors awaited the November employment data, which is supposed to reflect healthy job growth previous month. According to a Dow Jones survey, 581,000 jobs were gained in November.

Didi’s stock rose as much as 14 percent in early trade in the United States on Friday after the firm disclosed intentions to delist from the New York Stock Exchange in favor of a Hong Kong listing.

The firm said on Thursday that it will “instantly” delist from the New York Stock Exchange and start planning for a new listing in Hong Kong. As per a release, US shares would be transformed into “freely exchangeable shares” on some other global market.

In a Friday note, OANDA analyst Jeffrey Halley said that OPEC+’s “unexpected” choice to keep their 400,000-barrel-per-day production hikes on track whereas having left a “massive poison pill” by preserving the privilege to organize an urgent meeting and adjust its opinion if new coronavirus variant Omicron keeps going on dragging down oil prices boosted oil markets.

At this point, the marketplace is doubtful to put OPEC+ to the question, since the group has shown to be rather impervious to stress from the US president and other authorities. Nonetheless, fears about the virus linger, forcing Brent crude to suffer to reclaim $75/b and WTI to reclaim $70/b in the near term.

El Salvador has been pressuring companies to take Bitcoin (CRYPTO: BTC) since becoming the world’s first country to do so early this year, however one proponent of the apex cryptocurrency believes that this method isn’t appropriate.

Following a couple failed tries to break through $59,000, bitcoin is now stuck below $57,000. This apart from a 7% surge from Cardano and yet another all-time peak from Terra, many alts are unusually consistent on a daily basis.