EUR/GBP soares near 0.86 in a downward sloping channel. 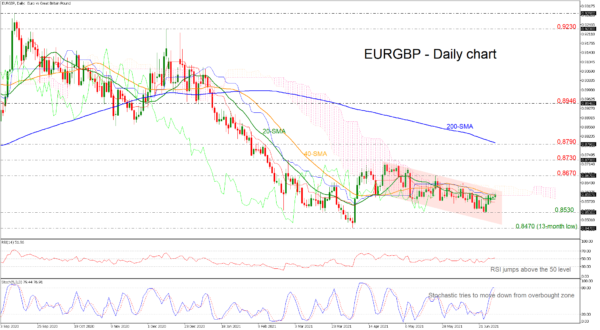 Following the bounce off the 0.8530 support region, the EURGBP is constructing an upside rally. However, since April 26, the market has been developing within a declining channel. A boost could break this pattern to the upside in the coming days.

The RSI is flirting with the 50 level to gain some momentum, but the stochastic is turning down from the overbought region, indicating a likely bearish pullback.

If price action rises above the 0.8600 level, the 0.8670 barrier could be tested. Additional advances towards 0.8730 and the 0.8790 barrier could be seen if this critical level is broken. Because it intersects with the 200-day simple moving average, the latter is regarded a strong resistance (SMA). As the market rises, it may pave the way for a stronger optimistic trend till 0.8946.

Since topping at 0.8730, EURGBP has been negative; however, a break above the downward sloping channel might change the current short-term bearish perspective to neutral.